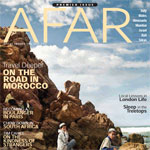 Yesterday I received the premier issue of AFAR magazine in the mail. I was beyond impressed. There were travel stories about off beat international locals and there wasn’t a tie in to a Marriot resort to be found anywhere. There is a write up of South African Bunny Chow, a street food. An entire spread of just feet from around the world. Their feature on Morocco wasn’t about the new â€œitâ€ spot in Marrakech, but a drive through the Atlas Mountains and interactions with Berber tribes. The back page features a story by Tim Cahill. It was extremely refreshing.

The magazine was conceived by the two founders, Joe Diaz and Greg Sullivan, over beer on the beach in Goa, India and is intended to represent the growing movement in experimental travel, which for Americans is generally a new concept. They have brought in a very talented group of editors who helped launch and run numerous successful publications. Having several assignments in the pipeline for AFAR I have been taken aback somewhat of how organized they are how much the concept really seems to mean to them. When every other magazine seems to be going down the drain, I really appreciate this. It makes it so much easier to be a writer when the editor is happy and believes in what they are doing.

The magazine is ambitious. For their six annual issues, they hope to have 300,000 subscribers by 2010 and also launch a website, books, radio, TV projects, and offer students yearlong study abroad scholarships. With most of the people I know rarely leaving Ohio, a concept like this is very welcome. The magazine officially hits newsstands August 18.