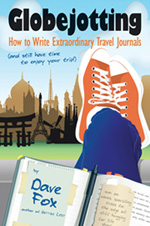 I never heard of Dave Fox until Inkwater Press sent me his two books a few weeks ago. Fox, who won the Erma Bombeck Writer’s Workshop Book Proposal Contest, recently published the second edition of Getting Lost: Mishaps of an Accidental Nomad

and will release Globejotting: How to Write Extraordinary Travel Journals (and still have time to enjoy your trip)

this week. Let me say I was pleasantly surprised.

Fox is a travel humorist and, I must, say is actually funny. I read alot of travel narratives tha try to be funny. Sometimes they succeed, more often than not they don’t. Getting Lost: Mishaps of an Accidental Nomad

is a collection of Fox’s travel experiences as a child when his parents moved from the US to the UK for a year, while studying abroad in Norway, being a college student traveling abroad, living in Turkey, and being a guide for Rick Steves. The book exploits every embarassing thing that happens to Fox while traveling, and there are quite a few: causing a near riot in Tunisia, getting stopped with a HAM radio at Finnish customs, and accidently busting a beer in his Norwegian Exchange schools principal’s office. He doesn’t brag about how many travel experiences he has had or the things he has seen. He doesn’t shy away from revealing what a travel nerd he was growing up or still is. It’s not macho writing at all, which I see alot of male travel writers fall into these days. He reminds me quite a bit of Bill Bryson, but, at least in these books, isn’t taking on topics nearly as big as Bryson (such as the Appalachain Trail or the History of the Universe). Fox isn’t going to win the Pulitzer from the looks of it, but he’s entertaining.

The second book, Globejotting: How to Write Extraordinary Travel Journals (and still have time to enjoy your trip)

is less aimed at professional travel writers than amateur scribblers. Any travel writer will appreicate the tips though, which will help brush up on your skills and help you set a good pace for writing while traveling. If anyone is interested he has a travel writing workshop set on a Rio to Barcelona cruise coming up next March/April. The price (under $3000) includes airfare so it’s quite a steal for the trip alone.